Ok, so so much is happening its hard to keep a handle on things, but really, whats new? I have half-written my paper for the MTN Science Center design project. The report is also half done, but that shouldn’t be too much of an issue. We’ve been scouring through hardware stores in search of various devices and parts so we can prototype our design solutions and test them. I’ve also been modelling mine on PRO-Engineer so I should be able to post something up soon. Forgive the lack of photo’s of late, but I really have been so busy! Everything is workign out, just as I’d hoped it would so I’m glad. I just have to visualize and believe..visualize and believe.lol!

My EWB project is a little shaky still and the research outputs havn’t met their deadlines. It looks like I’m going to have to intervene in the research teams in a big way. It will piss a few people off in the process, but in the end its my head on the chopping block if we dont deliver, so I dont mind too much!
The EWB leading committee (of which I am NOT a member) has come to the surprizing realisation that next year, when they all graduate, there will be nobody around to drive the committe, nobody to share and continue their vision, and no legacy that has been left behind to remember them by…Wow, this group really needs to be electricuted or something, anything to make them WAKE UP and start putting some solid planning in place. I know that some very good work has been done, but honestly, “Does anybodu know a project we can work on to spend our DBSA funding?” is not the way to plan future projects! I only hope that the level of committment, hard work and solid organization shown on my project can be an example to them (of course it is, but I just want to re-iterate that point just incase someone wasn’t paying attention). 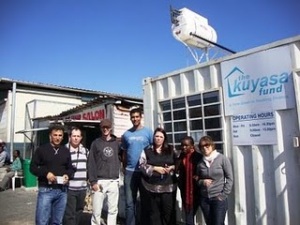 I was really shocked last weekend when my godfater mentioned to me that he was very instrumental in setting up the funding for the Development Action Group, DAG.

http://www.dag.org.za/
Now these people don’t mess around, I mean these are the guys who were responsible for majorly successful projects such as the microfinace venture THE KUYASA FUND.
“The Kuyasa fund promotes community-based saving and provides micro-loans to individuals for home improvements. “
I think we bumped into them on the visit to Philippi, I know I uploaded a picture of us with the Kuyasa fund guys. (these kind of coincedences are happening so frequently that I don’t know why I bother mentioning them anymore since everybody in Cape Town seems to be involved with everybody else in some way). Oh yes, Ive found the pic, there we are (well I’m not there coz I’m behind the camera but anyway…) Its the one above this paragraph, not below, thats the PHP.

So yes, they are awesome, and have won tons of awards for this project as well as the “PEOPLES HOUSING PROCESS COURSE’ which is a 4-day training course in home improvement processes. This is so important for people who want to upgrade their shacks, but dont know a thin about how to do it in the safest, cleanest and most cost-effective way!

So anyway, my awesome godfater (who is very excited about hooking me up with a local idol of mine, Gita Govan who I have admired for ages and have never had opportunity to meet, and who happens to me a close friend of his…coincidences???) helped raise …wait for it…$10 million to start this fund and who craftily invested it so that is grew and the interest alone serviced the fund’s operating costs! Now isn’t that something?

Well, it gets better, so let me wrap up by mentioning a few ideas of mine that are heavily in the concept phase right now…A similar EWB fund, on a far smaller scale than the Kuyasa budget of course, but with the exposure from the catering project, why not? Why not? We spend a portion of the funding on piloting, testing and getting a feel for how best to implement and pitch the high efficiency stoves, then we buy up a whole lot of stoves and loan them out to township caterers on a 3-month payback scheme, already having worked out their individual cost savings and turnover rate. The project will keep returning cash, allowing us to buy more stoves and loan them out to more people, eventually reaching out to the next chapter of EWB, which I say should be the East Coast (since this area has many more mielie-boilers than the Western Cape does).

Alright, enough crazy futuristic plannning! I only hope that I can be around to help get all this into action, EWB needs it…I’m off to JHB today, again, to see my Prince of Thieves, who has stolen my heart and rode away with it on the back of a Kangaroo into the sunset…Thats a personal joke for you, babe. Mwah!