If these words confuse you, don’t worry, you’re not alone. Isn’t it strange that after more than 4 years doing Mechanical Engineering, the mention of a ‘circlip’ can still leave me puzzled. I remember my first year, when words like ‘sprocket’ and ‘cam-shaft’ in class sent me into a mild panic. Then it was different, I was in a class of 100 and there were just 9 girls. It was half comforting to learn that although many of the guys came from Engineering families and had been taking car engines apart from the time they could walk, most were as confused as I was! (Not that they’d ever admit it). UCT’s current first year class has about a 40:60 split of girls to guys, so we’re getting somewhere.
I joke with my class buddies that I’ve had to “grow a pair”, as much as I risk sounding like a FCP for that, being around this many guys for this long has that effect on a girl. FCP = Female Chauvinist Pig...
(By the way, a circlip is just a c-shaped piece of metal that fits around a cylinder to hold things in place).
Surprise, surprise, I’ve actually been enjoying my design assignment. Its real this year, and I’m being exposed to so much! Not just that silly machine component plug-and-chug nonsense that a certain “favorite” lecturer of mine teaches. (Sorry, this is a personal joke for you V.G., I know you feel my pain!)
Yesterday I went to the UCT RAG fashion show, a friend had entered the design competition. All in all, it was fun. I love any excuse to scrape away the grease from under my fingernails and put on some heels and some red lipstick! (Joking!) ((about the grease, not the red lipstick ))
My friend did well, I’m very proud of her. She’s soon to be an electrical engineer, and juggling engineering with fashion must be a challenge, bu she pulled it off…Quite literally actually.. (The outfit she designed had a long shirt attached with magnets, which the model tore off half way down the run-way, turning it into a super-sexy dress.) You’ve just got to love engineers!
I’ve put up my friend’s design below and a few of the other good designs…the theme was township-chic vs city-chic. BTW, RAG, the organizers of the event is the organization that raises money for SHAWCO! So it was all for a good cause 🙂 …but of course. 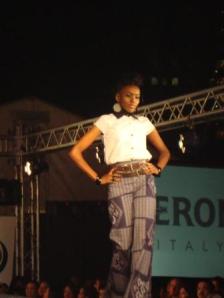 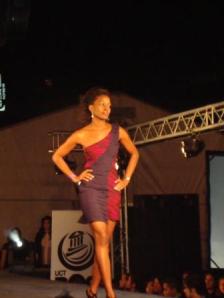