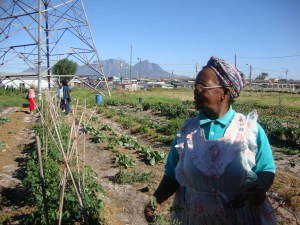 So I got up at 6:30 am this morning and dragged myself to campus. I met up with three other members of my project team at a BP garage in Kenilworth. The plan was to go on a tour of the NGO Abalimi Bhazekhaya (the planters of the home), and their community gardens in Gugulethu.

At the BP the strangest thing happened: we met up with another group of people who were going on a different field trip, coincidentally meeting their tour guide at the same garage!
These were a bunch of sociologists from all over the world: Australia, Uganda, UK, Lebanon, USA, Brazil and SA, and they were part of Rajmohan Gandhi’s organization, the Initiatives of Change. This group was following Prof Gandhi on a worldwide tour. They were really interested in hearing about our project with Engineers without borders, especially since they had a sustainability expert in their group! So after we all frantically exchanged details and schedules, our tour guide, Rob arrives and it dawns on us (20 or so) ‘intelligent’ human beings that we were heading out on the same tour! 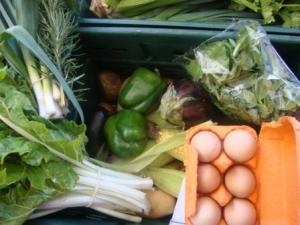 Abalimi was simply awesome! How it works is women from the surrounding community (grannies really) all plant on this tiny peice of land, and share everything they produce. They feed their families from it and whatever surplus is grown is packaged at a central packing house and sold to rich schools and businesses (organic fresh produce-yum!). These food baskets are an assortment of the most beautifully fresh, delicious looking vegetables, herbs and eggs. You would never guess they were grown in the midst of such heartbreaking poverty. The smell alone made us so hungry, I didn’t believe veggies could do that! We might actually choose the Abalimi food-garden in Nyanga as our site for our bio-digester. There are tons of problems we still have to work out though.
I walked around Nyanga market, this is the area with the highest murder-rate in the country. The people were quite scary, and the meat vendors smelled of slaughtered sheep. It was awful, but right across the road was Abalimi. A real Haven of Hope (one of their colleagues id Haven of Hope)!

The group we were with from Initiatives of Change invited us to a talk by Rajmohan Gandhi, the grandson of the great Mahatma Gandhi, this evening. It was at UCT, and hosted by the vice chancellor. I didn’t even know he was coming to UCT! So much for emails! The talk was amazing. Prof spoke of being a boy of ten and sitting beside his awesome grandfather at the multi-religious prayer groups he used to hold, between 1945 and 1949. He’s recently written a biography Mohandas: A True Story of a Man, His People and an Empire. I have to check this one out, even though its not on sale in South Africa…yet...
After the talk, I went to say hello to the Prof. He was just so pleasant and humble and was oddly excited about the fact that I’m with EWB...He also sent his regards to both my parents. How sweet!
Well, no rest for the wicked! Shower, then back to work.. thank god that I have tomorrow off to work!